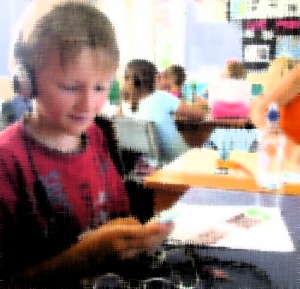 I love talking with people of a certain age who have never taught in a classroom. The conversation generally starts with a line something like this: “You teach high school? I don’t know how you do it!” Once that fact has been established, my conversation mate generally meanders through all of the ills that have befallen our public schools in the past decade, me murmuring my own opinions about my profession from time to time (which are generally countered with a “Well, back in my day… ” dismissal). We come to an end of our chat with my new acquaintance sighing and then summing up the vast problems of adolescents today by saying something along the lines of “Kids just aren’t the same these days.”

While I smile politely through most of the conversation, secretly (or not so secretly) disagreeing with many statements, I do tend to agree with that final statement: kids just AREN’T the same these days. It is almost dizzying to think of how much our world has changed in just the past decade (use the size of a cell phone as a measuring stick if necessary). How could we expect our youths to stay the same? Theirs is a world of texting, tweeting, Googling, and Facebooking, and none of these things were common knowledge (much less common verbs!) when I was in high school, even though that was only a short ten years ago. Instead of bemoaning that the students of today aren’t responding to the standard method of delivering instruction, we should meet them on their own playing field, integrating technology into our everyday practice. With this thought in mind, I structured my classroom around the use of iPods, and I quickly learned that dedicated educators have the opportunity of harnessing so much educational potential through one tiny device.

I became the shepardess of thirty iPod Touches as a sort of fluke; I was a young English teacher, and my school district had just received a grant to place these devices in English, Math, and Science classes that were preparing for our state’s standardized tests. The cart resembled R2-D2 from Star Wars, and it had a slot for each numbered iPod that came complete with a cord that connected it to the cart itself; this allowed for mass charging and syncing of the iPods. Inside the cart, I found that I was also furnished with a Macbook, a digital presenter, and a wireless hotspot.

Instead of the excitement I’m sure I was meant to feel (oh the entitlement of being one of the first teachers in the district to be part of this new wave in education!), I was completely freaked out. Nothing in my limited teaching experience thus far, not to mention my education courses in college, had prepared me for managing or using iPods with my students. What in the heck was I supposed to do with these things? Weren’t they just for listening to music and playing the occasional game? What was I supposed to do if a student walked out with one? For that matter, what was stopping them from coming in after hours and wheeling out the entire cart? I was besieged by thoughts of mass educational failure, followed by the inevitable termination of my teaching position, and I counted myself as very unlucky indeed to be chosen for such an “honor.”

I eventually overcame my terror and created a system where each student was assigned an iPod by his or her seat in the classroom. Students and parents signed a waiver at the beginning of the school year that had them acknowledge that they would be responsible for half of the iPod’s cost if theirs was to go missing or become damaged beyond normal wear and tear. Each desk was furnished with an iPod “parking space,” which was simply a laminated piece of paper that had the outline of an iPod that included the iPod number assigned to that desk and the rules for using the iPods; when the iPods were not in use, students were to turn them face-down in their parking space. Students were to pick up their assigned iPods from the cart when first entering the classroom and return them during clean-up time, about three minutes prior to the bell ringing. Because I was teaching five separate sections of tenth and eleventh graders throughout the day, this system made management of the devices easy and also prevented students from simply playing with their iPods when instruction was occurring.

My first foray into using the iPods was very simplistic, but it eventually grew into an effective research project. By simply using the Safari application, I had students look up various facts about our next author and answer questions on a worksheet. This first project turned out to be a little too basic (and a little too much like looking up facts in a textbook), so we added another element to our next project. When we were beginning our unit on Zora Neale Hurston, I created a modified webquest by simply looking up informative websites and saving the links to my PortaPortal website. I then created a shortcut on the iPods to my PortaPortal site. Students were placed into groups and assigned the job of creating “Farcebook” profile pages that had to include posts, biographical information, and friends that would have been included if Zora Neale Hurston had had a social networking site like Facebook. Different variations of this project became a regular event in my classroom because my students felt like they weren’t doing “real research” because of the format of the final product, and they were much more amenable to finding the information using the iPods than they had been when doing a similar project using printed materials.

After that initial success, I began to investigate more specialized apps. I soon found that some simple (and free!) games from the App Store could be used as quick and efficient bell ringers (or warm-ups). Right before our standardized tests, my remediation students began using Miss Spell’s Class for the first five minutes of class every other day to review commonly misspelled words. Students would record their scores on index cards that I would collect for participation credit at the end of class. We would also often start class with Chicktionary, a game that requires letters to be rearranged to spell different words; I would ask students to write down one word from their game that they weren’t familiar with and then use their dictionary app to find the definition. Depending on the amount of time we had in class, I could extend this activity so that students had to use that word in a sentence or quiz a partner on the meaning of the word. We also made use of the Grammar Up app as a way of reviewing concepts prior to an assessment.

For my more advanced students, I started a class blog that allowed us to create “silent discussions” where students could use their iPods to respond to discussion questions. I would post a question on the site before class began, and students would respond in class by commenting on the post and then responding to posts from their classmates. I molded this activity in several different ways, including having students use certain sentence structures in their comments (i.e. you must use a compound sentence in your post) and also having them post their own questions for the class to “silently” discuss. This activity became a favorite of my students because it allowed the quiet students (who wouldn’t speak at all in regular discussions but often had wonderful ideas) to express themselves, and it was also fun to see just how long a class of twenty-five tenth graders could sit in a room together and be verbally silent while they were interacting with each other on their devices.

I also utilized the iPods as an easy way to differentiate instruction. My eleventh grade remediation class had students with who received special education assistance as well as students who were just shy of cutting it in the regular level course. Because of this wide array of ability levels, it was often difficult to deal with behavior management, as students would either be bored because instruction was too slow for them or begin acting out as a mask for not grasping the concepts as quickly as the others. By putting an audio copy of the books that we were reading in class on each iPod and creating reading guides that highlighted concepts that we had discussed as a class, students could work at their own pace while I circulated throughout the room and provided assistance to individuals. The reading guides eventually turned into an Easter egg hunt of sorts, with questions such as “After reading Chapter 2, look back at page 5 and copy the example of personification used there.”

In addition to the techniques I described in detail above, I implemented the iPods in a myriad other ways. Google Docs helped me to create simple multiple choice (and even short answer) assessments that could be completed on the iPods; these gave me an instant picture of how students were doing with concepts that we were discussing in class. iBooks’ PDF feature allowed me to upload copies of my PowerPoint presentations so students who were absent could come in and copy notes quickly. The pre-loaded camera app allowed my students to take pictures and videos of group projects. The QR Code reader allowed me to create scavenger hunts where students would scan the codes, be sent to sites or videos, and answer questions for a project. The best part was, I was only on the tip of the iceberg; I can’t even begin to imagine what these devices could do in other disciplines and grade levels.

Now, with all this said, I am not saying that the iPod Touch is the final word in student engagement; in fact, by the time that this article is read, this piece of technology may be completely outdated. iPads, Android devices, and other devices have just as much potential; I have just spoken from my work with the technology that was made available to me. The point that should be drawn from my experience is that as educators, we must also be innovators; we can’t stick to the same classroom strategies and expect that engagement will come naturally. The classroom must morph and change with the rest of the world.

If a reader is looking for a place to start with technology in the classroom, I hope that this article has provided some useful tips as well as a little inspiration. However, I am also hopeful that this article becomes outdated quickly as teachers continue to develop fresh approaches. Using the media that students are already comfortable with to engage those young minds in the important work of the classroom just makes sense.

I am an experienced teacher, editor, and writer. if you are in need of editing or writing services, please consider visiting my Elance profile page: https://www.elance.com/s/edit/beb5z/ Thank you for reading my article!

This entry was posted in Articles, iPod and tagged education, iPod, technology. Bookmark the permalink.